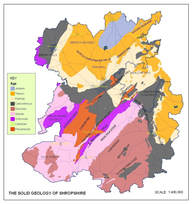 Shropshire’s Migration North
​
Michael Rosenbaum is an Emeritus Professor of Engineering Geology, a Scientific Associate at the Natural History Museum and a Friend of Ludlow Museum.  He moved to Ludlow following retirement and has since immersed himself in the geology of Shropshire and the Marches.  He is well placed to tell us about the value of our local collections and has furthered the understanding of all things geological through his guided walks and lectures in Ludlow and the surrounding area.

In his talk to Ludlow U3A Michael will tell the story of Shropshire’s northward migration, touching on new discoveries of early life forms and the evolution of our local landscape. 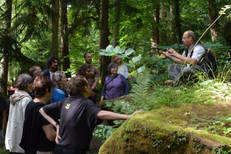 ​Simon Martin is a retired GP who used storytelling in presentations to medical colleagues whilst in work because he found them effective in putting across a point and more memorable than bare facts.  He has continued storytelling in his retirement because he wanted to keep his brain active and stimulated after finishing paid work. He is interested in the neuroscience of why stories are so effective and aims to educate as well as entertain his audiences by taking them on a journey of imagination, hopefully achieving both education and entertainment.  His stories are tongue in cheek, light hearted and fun.  If there are any morals and underlying messages they are all understated and there for the audience to mull over as it wishes.

​Why do they have thirty days?  What happened to February?  Why does the tax year start on 6th April?  Was George Washington born on 11 February 1731 or 22 February 1732?  Doesn’t September come from the Latin word for seven – so why is it the ninth month?  When was the longest year?  What sequence of dates repeats every 5.7 million years? Have you ever wondered why the months have different numbers of days, why the new year used to start on 25 March or why Easter falls on a day between 22 March and 25 April?
Robert Hodge is an historian and vice-chairman of U3A in Ludlow.  His talk will answer these questions and give an insight into the often confusing, sometimes amusing and always fascinating development of our current calendar system.

Rob Chapman is a Hypnotist and Mind Coach based in Shrewsbury.  He provides related talks and workshops but in his talk to Ludlow U3A will introduce members to meditation.  He aims to be both entertaining and informative in his talks and to give his audience ideas and techniques they can put into practice the moment they leave the talk.

​Although much has been written about the Second World War, what happened in neutral countries is less well known.  Christopher is a retired business executive and translator who has travelled extensively in Europe and developed an interest in what neutrality involved during World War II.  He examines the concept from the point of view of Switzerland, Portugal, Sweden & Denmark and covers the stories of how the contributions of four very different and altruistic people impacted on the outcome in those countries

The Big Clock and the Bells of Westminster

​Chris qualified as a chartered electronic engineer and has had a varied work experience.  He has always been interested in turret clocks, however, (the big ones up church towers) and had his first restoration job when he was 19 years old.  Since then he has developed an interest in both the technical and historical aspect of these clocks.  He has been involved in the restoration of clocks and has run courses on the maintenance and restoration of turret clocks. He has written many books and is currently Clocks Consultant to Salisbury Diocesan Advisory Committee.  He is well qualified to talk to us about the Big Clock and the Bells of Westminster. 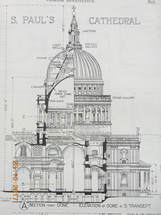 The Cathedral Builders
​
Our cathedrals inspire wonder and amazement in all of us.  How could builders using the skills and materials available at the time construct such huge and lasting edifices?
Keith Cattell, who is a retired architect from Wolverhampton with an almost lifelong interest in architectural history, will answer some of these queries. His talk will highlight the origins of cathedrals built to the glory of God but influenced by an army of human egos too.  Cathedral builders were supreme masters of their craft and the talk will look at the building methods used and, in the process, examine some of the severe structural problems they experienced and how they overcame them 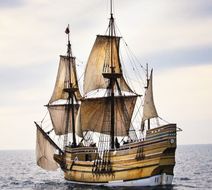 Phil describes himself as a mill town Lancastrian who has relocated to Shropshire. He has had a varied career as a teacher and as a journalist for national newspapers as well as running a national education charity.  He now earns his living as an author.  Among his books are 'The Mayflower Children”, a history of the events surrounding the More children and  “A Spurious Brood” a fictionalised account of the story, published in 2011 to favourable reviews.

Phil’s talk is the true story of Katherine More, youngest daughter of an ancient Shropshire family, whose four children were transported to America on board the Pilgrim Fathers’ ship the Mayflower.

​​A Career in Antiques

Philip worked for the London based Auction Houses, Philips and Christie’s for over 30 years ending his career as a director, head of department and auctioneer for Christies.  Starting as a trainee with Philips he soon found his passion in “antique” furniture and his experience has given him the opportunity to develop his understanding of furniture and its values.  He has travelled widely in Europe and has contributed to many art magazines and books and has been a lecturer, tutor and mentor to trainees in the field.  Philip’s talk will show a personal journey which demonstrates the training, daily routines and workings within the world of auction houses.